CONNECTING THE PAST  TO THE PRESENT AND TO THE FUTURE

Our 18th annual conference will either meet in Amsterdam in August 2021 or be conducted on;line, see below and the website sections Fees and Registration, Conference Submissions, Areas, Themes & Topics and Key Dates & Conference Timetable. Amsterdam is a splendid cosmopolitan venue for considering the conference programme with its focus on the role and nature of History Education in facing the existential threat from failing to constructively CONNECT THE PAST TO THE PRESENT AND TO THE FUTURE

The conference invites proposals for presentations from across the conference’s 6 Areas with its 22 themes and over 200 separate topics, click the Conference Submissions, Themes and Topics sub-section of the website in the HEIRNET 2021 Conference section’s drop down menu. 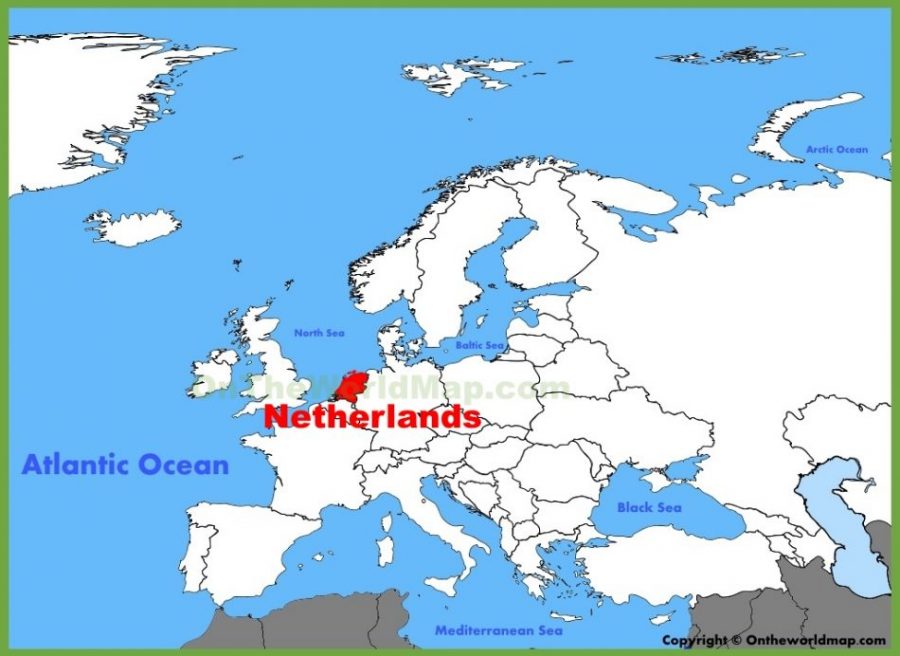 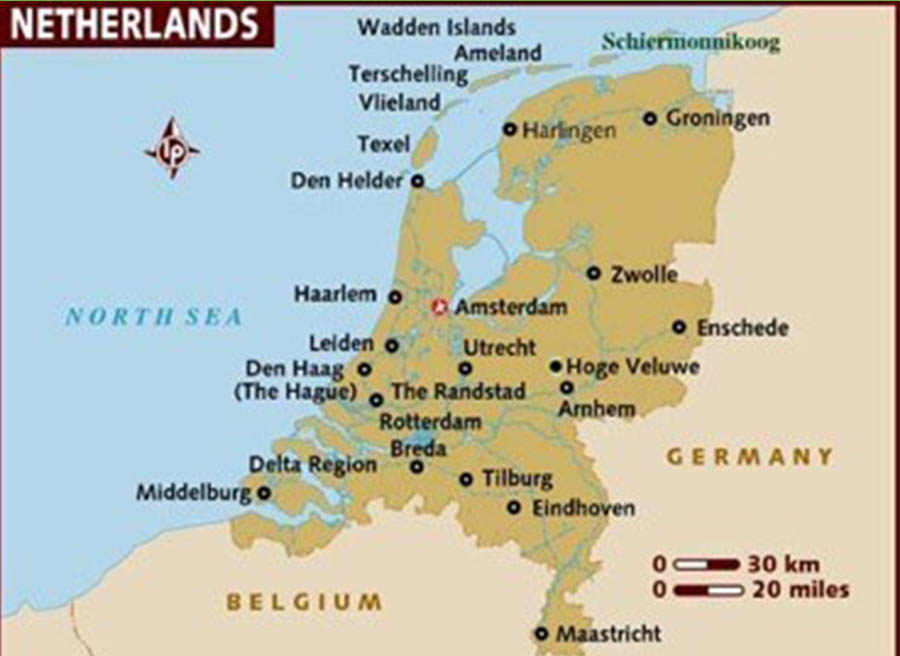 Amsterdam, the Venice of the North, a city of canals, flowers and bicycles. Since the 16th century Amsterdam has been a metropolis at the heart of Europe’s transformative impact upon the world that still osmotically permeates, influences and shapes our lives and identities and connects past, present and future.

Amsterdam’s tap and side roots penetrate the globe as a cultural, trading, fiscal and commercial power. Based upon Amsterdam, the country’s capital, the Netherlands’ outreach initially extended via the Spanish empire to the Americas and Africa. Subsequently Amsterdam’s impact also encompassed the Asian sub-continent, largely through the Dutch seaborne empire. Here Amsterdam played a key financial role as a centre of international banking and capitalism fuelling world trade, commerce and industry.

Connecting the Past to the Present and to the Future … makes history relevant to students. This can be a difficult task, because they usually tend to think that history is ‘all dead and gone’. Students often fail to see that the only way to make sense of the present and to develop feasible expectations for the future is provided by orientation on the past. Teaching how to connect the past to the present and to the future should therefore be a central concern of history teachers. Relevant history teaching cannot do without these connections rooted in the past. Not only history teaching, but also the decisions and actions of our political masters, as contemporary British history illuminates.

Click on the Conference Campus for information about the conference campus, lecture theatres and seminar rooms and links about the rest of the University of Amsterdam Applied Sciences.

The images below give an idea of the Amstel campus, Amsterdam UAS conference site in Amsterdam. 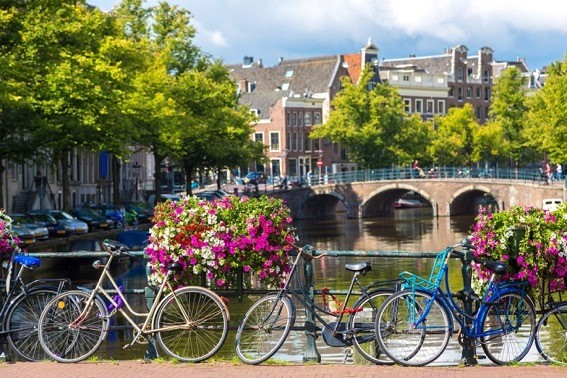 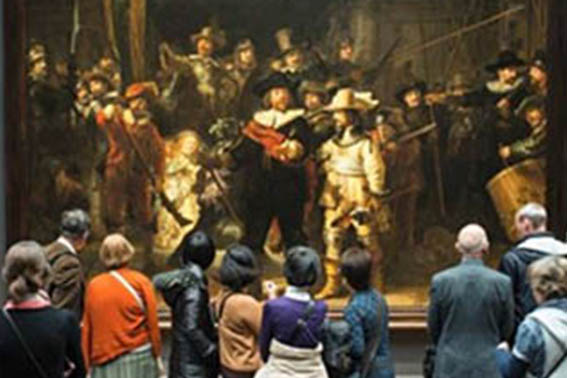 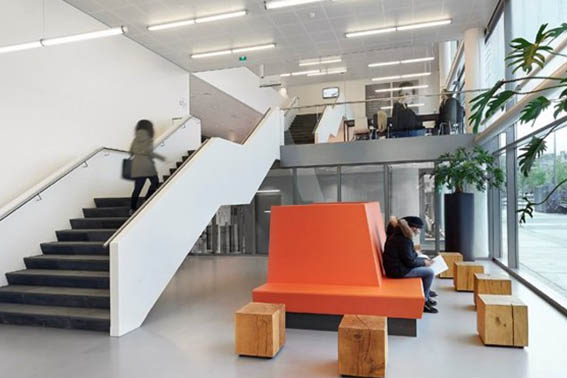 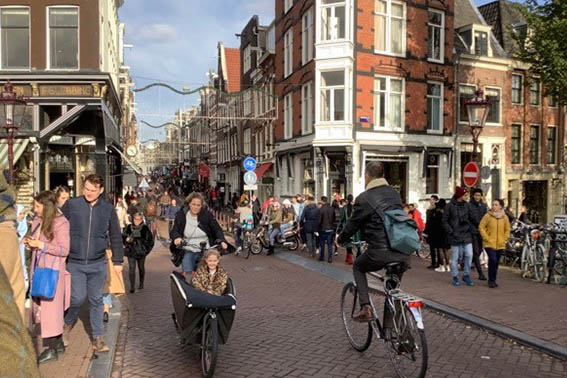 For further information about fees and registration, click on the Fees & Registration link to be taken to the relevant page of the website.

Strands The conference will have up to four parallel strands.

Sessions last for 90 minutes. Please note that delegates can run sessions on topics and themes of their own choice and manage them as they desire, i.e. they have full control.

The Conference Submissions, Themes and Topics  section of the website gives full details of what submitting an abstract involves. It lists the 6 conference areas, their 22 conference themes and 200+ topics and the types of conference sessions:  papers, posters, round tables, seminars, debates, workshops and delegate proposed themes & topics. On acceptance of your submitted submission with its abstract for presentation at the conference you  can register immediately.

To make a submission for the conference, click on the Submit Submission link that takes you to the Conference Submission, Themes and Topics section of the website.

Conference Flyer or Leaflet and the Conference Circular

The HEIRNET 2021 Conference Flyer or leaflet summarises the information about the conference and the range and Type of sessions and presentations on offer.

The Conference Circular is the flyer plus full details of the conference’s 6 areas, 22 themes and 200+ topics. 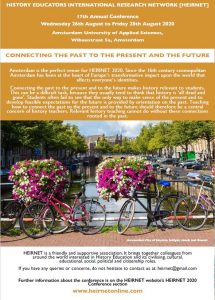 Closing date for submission of proposals for conference presentations

Final date of notification of acceptance of proposals for conference presentations.

Deadline for registration of delegates making presentations at the conference.

Deadline for registration for the conference of all other delegates.

Wibautstraat 5a., Amsterdam, The Netherlands

Deadline for submission of papers for publication in the History Education Research Journal [HERJ], edition 18.2

Amsterdam University of Applied Sciences for hosting the conference and its generous support.

The Historical Association of Great Britain for its support of HEIRNET and its journal, the History Educators International Research Journal- HEIRJ, incorporating the International Journal of Historical Learning, Teaching and Research– IJHLTR, 2003-2018].

University College London Press, for its support in the publication of HEIRNET conference articles and papers in the History Education Research Journal.